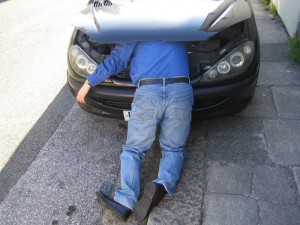 Make it a special Father’s Day this year with our fourth song; a driving rock classic that’ll have your dad’s blood boiling the next time he gets behind the wheel and, hopefully, make him want to run over that twonk presenter while he’s at it.

If you’re not one of the 300 million regular viewers of BBC’s “Top Gear” this will tell you everything you need to know about “Jezza”; a man that 49,447 incredibly stupid people once petitioned the government to have made Prime Minister (fortunately for us all No. 10 said no).

Whether it’s dismissing the legitimate concerns of climate change scientists, espousing offensive opinions for money, or simply using the legal system to suppress tales of his infidelity, Jeremy has everything the reactionary, intolerant, diesel-swilling motor muppet could ask for (apart possibly from his own breasts, although we do offer evidence to refute this).

So, scroll yourself down the page a little and grab some free choice noise to accompany your next track day rampage. Wind down the windows, crank up the stereo, and push your foot through the floor like there’s a jacketed mid-life crisis in a Mercedes lurking in your rear-view …

All we know is, he’s called The Git …