Always Look On The Bright Side Of Radiohead 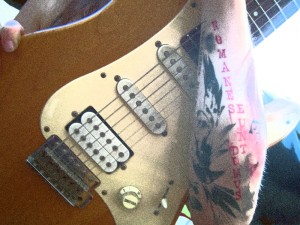 When people talk of Radiohead the words “miserable” and “as fuck” get thrown around a lot, which is entirely unfair when you discover that one of their earliest demos was positively brimming with unbridled cheer.

Thanks in large part to a bitter copyright dispute, Thom Yorke and co. were never able to release the demo commercially, and have never played it live since either. Instead they chose to take the band in a completely different artistic direction, abandoning forever their “glass half-full world” view.

Rather than let this rare, unreleased gem be lost to musical history we decided to take matters into our own hands by obtaining a copy for ourselves and give Radiohead fans a tantalising glimpse into the fascinating origins of one of contemporary rock’s most elusive bands. How did we come by this demo, you ask? Well, let’s just say it involved a pair of rubber boots, a copy of “Horse and Hound”, and an industrial-sized drum of moisturiser and leave it at that.

Now that we’ve whet your appetite for this lost treat, scroll down the page and download it a pristine MP3 that we’re sure will have you smiling both inside and out for weeks. So much so, in fact, that you’ll want to go and subscribe to our YouTube channel while you’re at it!

When you look at it, life’s not always a piece of shit …

[Our lawyers would like us to point out that the narrative outlined above is entirely untrue and has been fabricated purely for comedic purposes. Apart from that bit about the rubber boots and the moisturiser … that bit’s true]