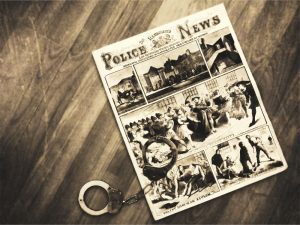 They are often referred to as the “thin blue line”, although many have implied over the years that the line might in fact be somewhat thicker. Not us, of course … we’d never stoop to making such a crass insinuation.

Despite what the penny dreadfuls would have us believe the life of the average woodentop has never been particularly glamorous; if they’re not apprehending despicable rotters who bring our glorious empire into disrepute by disturbing Her Majesty’s peace they’re mopping up Saucy Jack’s latest effort to teach himself anatomy using a local dollymop.

It would probably not surprise you to learn, therefore, that a keen mind is far lower down the list of requirements for joining the constabulary than a steely resolve, moral fortitude, a strong constitution, and an endless supply of dry, sarcastic retorts to any comment a citizen of Albion could possibly put forth. Besides, who needs the prodigious mental acumen of Mr Faraday when you have a big stick?

So, while we vigorously question this top-hatted urchin (just as soon as he stops singing “Consider Yourself” and helping himself to the contents of other people’s pockets), why not help yourself to an MP3 that will put a spring in the step of even the flattest feet. And, when you’ve done that, you might want to subscribe to the magic lantern show that is our YouTube channel.

UPDATE: We didn’t spot it at the time it went out, but it turns out this song was featured on the second episode of the revived Mitch Benn Music Podcast. Follow the link to check it out (we’re at around the 25 minute mark)! Huge thanks to Mitch for including us – very much appreciated!