Who Said You Could Die, You Bastard?! 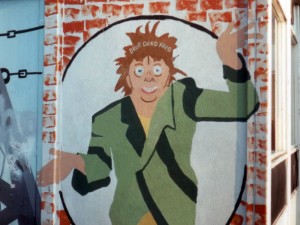 Hey, kids! Stop snogging, and pay attention to me! ‘Cause if you’re a wild-eyed loner standing at the gates of oblivion, then hitch a ride with us … this really IS the last freedom moped out of Nowhere City. Don’t tell your parents!

So, once again, we find ourselves in the incredibly annoying position of having some selfish bastard that we’re really fond of dropping dead on us, making both our lives far less brilliant by their absence, and compelling us to throw yet another bunch of stupid words and associated noises at you.

It’s not our fault, though … blame that stupid girly knob-end Rik; if he hadn’t exploded onto our tellies when we were “da kids”, growing up in Thatcher’s Britain in the early 1980s, then our generation would never have found its unquestioned comic hero in the shape of a loud, sexy, big-bottomed anarchist. Seriously, it’s his fault. You want evidence? What about the god-damn jaffa cakes, asswipe?!

If you carefully side-step the roof hatch trap we’ve baited with a cheese and pickled onion sandwich and scroll down the page you’ll be able to get yourself a download in your favourite bit-rate (although we’ve spat on one of them so you know which one is ours). And don’t forget to go and subscribe to our YouTube channel while you’re at it!

Finally, why not donate to Headway – the brain injury association – in memory of Rik?

UPDATE: You can now download this song on “The Love E.P” along with three other fantastic tracks!

"Who Said You Could Die, You Bastard?!" *
Written by Intermittent Explosive Disorder