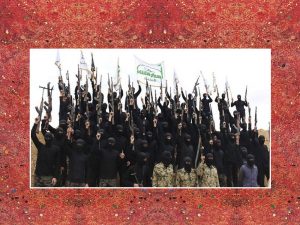 It is often said that Christmas is a time for peace on Earth, and goodwill to all, but it seems that neither the year itself (or a substantial number of people living in it) have actually gotten that message.

Given the awful number of people forcibly propelled into oblivion – whether for political reasons, to satisfy the will of some imagined deity, or because the perpetrators are just murder-happy arseholes – we figured that the world needed an epic charity song to spread a message of peace, hope, and not arbitrarily terminating the existence of other people.

So, we put our “We Are The World” hats on … then we took them off again (that record was terrible), and called a few friends (huge thanks to Tam Eaton, James King, Glyn Winstone of Secrets and Lies, and Ryan Yates) to lend their voices to our big, musical drive against rampant bumping-off which is now available for you to download in cruelty-free MP3 format below.

And, since it’s all for charity, we’d like to encourage you to donate whatever you can to War Child or Médecins Sans Frontières – two excellent organisations that work tirelessly to help people the world over who have found themselves on the receiving end of those who can’t keep their homicidal urges to themselves. Please give if you can – you’ll be making someone’s life far less crappy if you do.

Be excellent to each other …

UPDATE: You can now download this song on “The Considerable E.P” along with ten other fantastically festive tracks!