We Wanna Start A Fire 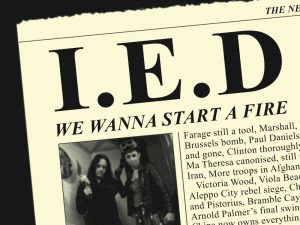 We don’t usually do lyric parodies, preferring instead to inflict our own original creations upon you … but, with all that’s happened recently this just seemed to be the perfect vehicle for saying simply: fuck this year.

And so it is with due gratitude and apologies to Billy Joel that we offer this, our combination parody/review, in the vain hope it may offer some insight into a year many feel had outstayed its welcome by mid-January. We’re also kind of hoping the satire/criticism thing gives us sufficient coverage under fair use to stave off a lawsuit from the Piano Man.

As 2016 draws to a close, and we roundly slap all those who point out that it has, in fact, been statistically no worse than any other year (nuts to you, Captain Joke Kill, we lost a whole bunch of cool people!) we invite you all to join us in musically remembering everything about the past twelve months that sucked an impossibly huge mountain of donkey balls. From the people we sadly lost, to the people we sadly didn’t, and every rancid cherry on the crap-flavoured cake of world events in between.

So, while we cross our fingers and hope that Mr Joel is as lovely a humoured chap as we’ve always imagined him to be, why don’t you scroll down the page and download an MP3 that will hopefully help you party away your New Year’s Eve like it’s any year except this one. And, once you’ve recovered from the hangover, you’ll want to subscribe to our YouTube channel.

Good year for the woeses …

UPDATE: You can now download this song on “The Considerable E.P” along with ten other fantastically festive tracks!