Don’t Tell Anyone I’m A Spy 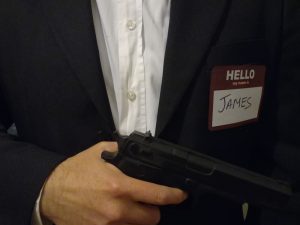 He is suave, sophisticated, and cool. He is also nihilistic, sexist, and amoral but, surprisingly, these are not his worst qualities. That honour must surely belong to the fact that everyone knows who the bloody hell he is.

Discretion is not something they teach at spy school, largely because the kind of person who enrolls usually possesses sufficient mental furniture to know that advertising one’s existence to all and sundry is the most efficient way to end up being hurled martini-first into the shark tank of a megalomaniacal sociopath bent on world domination.

It is therefore something of a minor miracle that the one graduate of the Secret Service School for Hush-Hush Happenings (or SSSHHH! as it’s known) whose name was as familiar to every boiler-suited henchman as the concept of their own expendability is not only still alive but is also the most successful practitioner of espionage they’ve ever had (if only in terms of box office receipts).

So, while we check to see if Project Ares is on course, why not snoop further down the page and download an MP3 that not only functions as a brief audio interlude, but also doubles as a flamethrower, stun grenade, battering ram, light aircraft, and three-tier mahogany buffet (with partially-reeded slender ballister upright supports)? And if your mission has gone well, why not move on to “The Secrets and Spies E.P” which features this song and three other killer tracks! Of course, after that you’ll want to go and subscribe to our YouTube channel as well!