The Secrets and Spies E.P 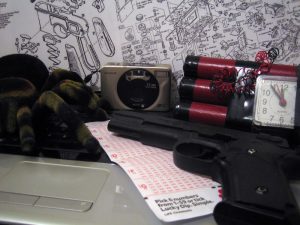 Forget gruff men in raincoats exchanging briefcases at a midnight bridge rendezvous, or teenage loners living in a Ukraine basement sneaking in through an unsecured port, we’ve got the confidential files you want; our brand new E.P, featuring four privacy-busting songs

If you fancy perusing detailed files on overly-conspicuous secret agents, privacy breaches of the drab and tedious, megalomaniacs funded by state-sponsored gambling, or that bloke who had his cock bitten a couple of times by a spider, then look no further.

Containing more embarrassing secrets than the memory cards ejected from hidden cameras in a Moscow hotel room, and featuring “Don’t Tell Anyone I’m A Spy”, “Lottery Super-Villain”, and two exclusive new tracks unavailable elsewhere, this is surely the perfect antidote to that otherwise lethal (well, stomach-churning) mental image of the goings-on inside a Moscow hotel room that we’ve just put in your head.

So, your mission, should you choose to tolerate it, is to scroll down this microfilm a fraction and download a zip containing the kind of soundtrack you’d expect to hear being played throughout a volcano lair while some guy in an eye patch and stroking a cat is eagerly awaiting the destruction of the world (or, more often, just a small corner of it, like Coventry).