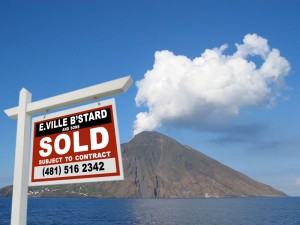 They say the best way to preserve an artist’s creative integrity and drive is to keep them hungry, but there’s actually a far more important reason why we shouldn’t ever be allowed to come into any money.

We’ve never understood how it is that people can suddenly find themselves the recipients of a pile of cash big enough to sink a naval frigate and yet they don’t end up spending it on building a loyal army of boiler-suited minions, highly-skilled sexy ninja bodyguards, and lairs so remote that even Google Maps would reluctantly admit they probably don’t exist.

This is not to say that you should think of us as twisted, bitter misanthropes who harbour an insane desire to wreak terrible vengeance on a world that has ignored us for so long instead of celebrating our unquestionable genius … I mean, that is what we are, but you shouldn’t think of us that way if you’d like any kind of long-term future in the new order after we take over.

So, as you contemplate how you can best serve your new rulers when the inevitable regime change comes, scroll down the page and download an MP3 for yourself so you can learn all the words (there will be a test, and failure is not an option). Once you’ve done that you’ll of course want to go and subscribe to our YouTube channel as well!