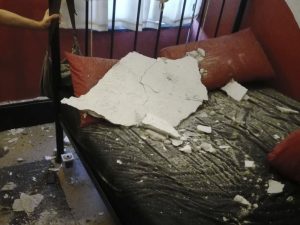 It’s that spooky time of year again, but there’s no need to fear the zombies, ghosts, werewolves, or witches because there’s actually something even more terrifying … potentially near-fatal encounters with masonry.

We’ve all had difficulty getting up in the mornings sometimes, fighting both the embrace of the duvet, and the strong urge to keep hitting the snooze button. Yet, despite the desire for “just five more minutes”, it’s amazing how swiftly one can rise when the bedroom ceiling tries to murder you.

As you stand, bollock-naked, and surrounded by plaster dust, numerous thoughts occur to you … like how, for the first time ever, you’re grateful that being a light sleeper meant you heard the ripping noise as the artex gave way and avoided a broken bonce by a mere three seconds. Or, perhaps, you wonder whether the attempt on your life by a sheet of plaster counts as a valid reason to phone in sick? You may even be cursing the fact that you’d only recently tidied up and now you have to do it all over again.

So, while we fetch you the roll of bin bags and a draft a strongly-worded letter to the landlord, you might want to scroll down the page a little and grab an MP3 to listen to as you sweep up the mess and count your lucky stars that you’re not seeing stars. Oh, and don’t forget to go and subscribe to our YouTube channel while you’re at it!

I nearly didn’t wake up this morning …