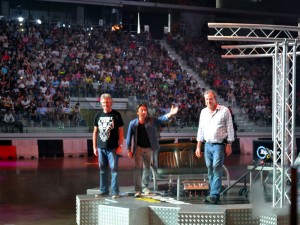 Well, this wasn’t exactly what we had planned for this week, but on seeing the petition demanding a certain scouring pad-haired media blight be reinstated had hit 900,000 signatures we agreed it was time to act.

Apparently a number of people greater than the population of San Jose, California, think that no professional consequences should befall someone who racially abuses and assaults a colleague. We’re not saying he’s guilty … we’re saying it’s scary that 1 million people think that it doesn’t matter.

Rather than spend our time worrying about which of our work mates might agree with this morally bollocksed attitude towards office relations, we instead decided to put pen to paper (well, noise to hard-drive) and announce clearly our feelings that anyone who could pledge their unqualified support for the right to bully others with impunity is a complete and utter twat.

Before you think too greatly about what kind of monstrous bell-end would both instigate such a petition and subsequently deliver it to Broadcasting House via the medium of a fat Stig in a tank, scroll down the page and download an MP3 in your preferred bit rate whilst seeking out the petition to get the giant cock-womble replaced by Alan Partridge. Oh, and don’t forget to go and subscribe to our YouTube channel while you’re at it!

And on that bombshell …

UPDATE: You can now download this song on “Planned Obsolescence: The Topical E.P” along with six other fantastic tracks!