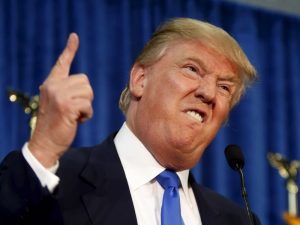 We wanted to write a song about the beauty and poetry of the English language, and how words often undergo subtle shifts in meaning from place to place. Sadly we couldn’t be arsed and wrote this song instead.

So, what can we say about the Republican presidential candidate that hasn’t already been said? Apart from the fact that he’s a sociopathic, infantile, bigoted, intellectually-vacuous, repeat failure whose only success is in continually selling grade-A bullshit to a nation that hasn’t bothered to take a sniff at what they were buying, probably not much.

So, before you start going through the process of establishing exactly who was responsible for smelling, dealing, denying, or supplying it you should scroll down the page and get yourself an MP3 that will give you something to listen to as the fourth horseman saddles up and adjusts his comb-over. And, of course, you’ll want to subscribe to our YouTube channel after that, won’t you?