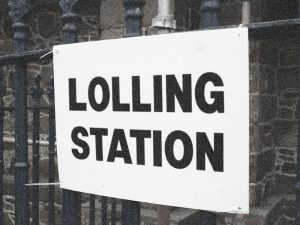 There’s a profound yet simple truth about the British: it’s okay if we don’t get what we want, so long as we can have a bloody good laugh instead. The snap election of 2017 more than delivered the goods.

It’s hard to know which facet of Theresa May’s bid to secure the mandate necessary to steamroller over the nation was most enjoyable, but the astonishing way she and her party took a certain crushing victory and pissed it so far up a tree as to create a hung parliament in mere weeks has to be high on the list.

Even UKIP having their arses handed to them on a scale not seen since Nigel Farage once took delivery of a container-ship load of prosthetic bottoms could match the sheer hilarity of seeing an ashen-faced Tory leader have to go cap-in-hand to Ireland’s answer to the Westboro Baptist Church (only with more organisation and better PR), simply in order to carry on adding yet more orifices to the gargantuan social, political, and economic clusterfuck the party have presided over for 7 years.

So, if, like us, you’re determined to greet the inevitable chaos heading our way from the comfort of your deckchair, with a beer in your hand, a knotted hankie on your head, and a hearty laugh emanating from your belly, scroll down the page a little and download an MP3 that will reassure you you’re in good company. Oh, and don’t forget to go and subscribe to our YouTube channel while you’re at it!

A good laugh heals a lot of hurts …

UPDATE: You can now download this song on “Planned Obsolescence: The Topical E.P” along with six other fantastically out-dated tracks!