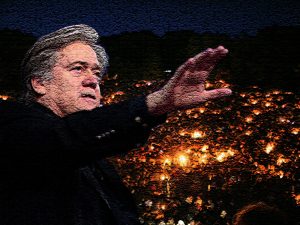 While he may have long been given the boot, Steve Bannon’s ominous presence can still be felt among the corridors of the White House. It’s a bit like the shadow cast over Hogwarts by Lord Voldemort … if Voldemort was an alcoholic Nazi, obviously.

In much the way Harry Potter’s nemesis had been sowing seeds of chaos and fear in the world of magic for decades, Bannon has used Breitbart and the Trump campaign to force American politics to take a lurch to the right more sudden and violent than an unsolicited pineapple enema.

And, if that wasn’t an eye-wateringly massive enough pain the arse, the Darth Vader of the alt-right is subsequently responsible for a rise in spectacularly-clueless racists striding through the streets in pastel-coloured polo shirts and stay-pressed trousers (doubtless all made in China), clutching tropical illumination, and sporting the banners of two of history’s biggest losers whilst complaining about the oppression of white people in America.

So, as you sit and watch these “patriots” march, without irony, in defence of a country that delivered a sound thrashing to the groups whose flags they now wave, why not grab something to help soundtrack the next Tiki torch-lit parade of inadequate racists? You could even check out the video! Don’t forget to share it with everyone and subscribe to our YouTube channel too while you’re at it, or we’ll public label you a virgin, soy-boy, beta, incel, snowflake cuck (before demanding civility and an end to name-calling, of course).