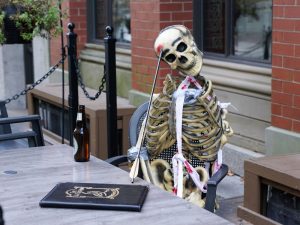 It’s said the only certainties in life are death and taxes, but what about sickness, suffering, solitude, and the fact that your favourite show will always be cancelled while “Mrs Brown’s Boys” gets another shitting series?

If we’ve learned anything over the last few years (apart from the fact it’s quicker to toilet train a toddler than it is to get cretins to wear masks over their noses), it’s that misery loves company, so OF COURSE a global pandemic was going to show up the minute you start recovering from massive organ failure (although that’s probably just our lead singer).

This special souvenir compilation of tributes to life’s crappiest experiences includes “Bum On The Window”, “Crash Landing”, “Self-Isolation”, and “Not Dead Yet”, along with four other songs that should help instill in you the unshakeable feeling that, while you can’t imagine how the next 12 months could ever be worse than the last, they very probably will be.

So, before you bathe yourself in several gallons of hand sanitiser, and duct tape all your head holes shut to reduce viral load, why not socially distance your way down the page and grab yourself a zipped-up soundtrack to the medical apocalypse that is your life. Don’t forget to infect your friends with it and subscribe to our YouTube channel too while you’re at it.

A collection of tasteful reminders of how life in general can be a bit bollocks
Download "The Illness, Injury, Isolation, and Death E.P" [37 mb]
© Copyright 2021 Intermittent Explosive Disorder
Kris
Albums, Featured, News